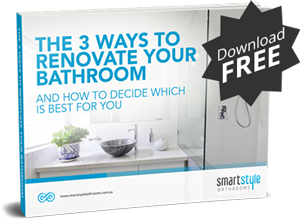 Bringing your dated, old family bathroom into the modern era will have you dreaming about tubs, taps and tiles.

You’ll be looking for individuality, durability and excellence at a price you can afford. This is when you need the advice of a trusted bathroom renovation company. For Perth homeowners, that company is multi-award winning Smart Style Bathrooms.

In consultation with an interior designer, you will be invited to put forward your ideas and arrive at a way to use them in the renovation. The designer will show you where money can be saved and in many cases can acquire products at discount prices.

Smart Style Bathrooms’ interior designers know that the benchmark of good design is durability. At the same time, by taking a customised approach to your bathroom renovation, Smart Style can create a spa-like sanctuary by combining luxury with practicality.

They know a clockwork-like plan is essential because various trades will be working on your project.

Handpicked professional, experienced and qualified plumbers, electricians, tilers, carpenters, cabinet makers are on the Smart Style Bathrooms team. Working with the designer and the project supervisor they will produce your dream bathroom.

While the team represents the essential trades needed for the remodel, you may want some extras, such as a heated towel rail or an audio feature. There is a growing demand for built-in i-Pad stands beside the vanity or on the wall in the bathroom.

A must-have for mould and bacteria control, is an extraction fan with a timer that runs for at least 30 minutes after the end of a shower. This reduces moisture, which helps keep bacteria and mould at bay while protecting devices. In addition, Smart Style uses oil-based primer, mould resistant paint and mould resistant silicon.

Additionally, products used in the renovation reduce bacteria and mould because strong chemicals are not the answer. They leach mould out of grout, after which the mould continues to grow.

Another hygienic choice is a toilet lid that closes automatically, preventing bacteria rising into the air when the toilet is flushed.

Looking at fixtures and furniture, the trend is toward double sinks set in a generous-sized vanity cabinet, a big mirror preferably doubling as a wall cabinet, open shower, a deep tub to soak in, and  a  half wall separating the toilet from the vanity. Niches in tiled walls beside the bathtub and in the tiled shower space create convenience. Another strong trend is a built-in seat in the shower space.

The director of Smart Style Bathrooms, Cameron Slater, launched the business in 2008. Since then the team of designers and trades has worked together on more than 1000 bathrooms in and around Perth. They continue to win building industry awards and this year they’ve won the Houzz Most Popular Brand award. This is because the team never cuts corners and achieves pristine finishes.

Fully insured and offering a 100 percent guarantee, Smart Style Bathrooms has earned the trust of home renovators in Perth, as so far it has never had a dispute with a client, or a complaint against it at the building commission.

To discuss your bathroom renovation, contact Smart Style. Or simply go online for a quote.